Heroin is a highly addictive, semi-synthetic opioid drug synthesized from morphine, a naturally occurring substance extracted from the seed pod of certain varieties of poppy plants. Heroin is an illegal drug classified as a schedule 1 narcotic. Schedule 1 narcotics such as heroin, are the most highly controlled substances and are illegal to possess. Heroin is considered to be one of the most psychologically and physically addictive drugs in existence. 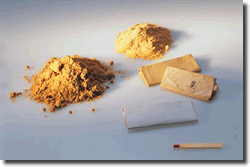 In the eastern United States, heroin is typically imported from Afghanistan and Columbia and appears as a white, off-white, or light brown powder, but unlike cocaine it does not have a crystalline structure visible to the human eye; it has a consistency more like powdered milk. Generally, the purer the heroin, the whiter the color, because variations in color result from the presence of impurities. 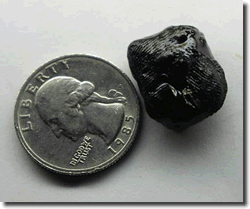 In the western United States, heroin generally comes from Mexico. Mexican heroin appears as a dark brown powder or a black "tar" substance, commonly referred to as "black tar" heroin. Black tar heroin may be sticky like roofing tar or hard like coal.

Powder heroin in the eastern United states usually comes in small wax baggies, known as "stamps", because these same bags are used by philatelists to preserve their stamps. It is typical for a brand-name to be on the bag to differentiate it from other batches and establish brand loyalty among junkies. Brand names range from the comical to the morbid; examples: "Superman", "Cookies and Cream", "Big Shot", and "Suicide".

Black tar heroin almost always comes packaged in rubber balloons, and powdered heroin sometimes does as well. Balloons are used because the resin content of tar heroin tends to leach out through paper wrapping and balloons provide the heroin dealer a means of quickly disposing of the drug if confronted by the police by simply swallowing the balloon(s).

Heroin produces feelings of euphoria and drowsiness in the user. Additional sensations created by heroin include: breathing dramatically slows, arms and legs feel weighted, their skin begins to itch and feel warm, their mouth gets dry, heartbeat slows, pupils constrict, and they occasionally feel sick (as if they want to vomit). When injected intravenously the user experiences what is considered to be the fastest and best "high" from heroin. The high that the user feels takes place within only 7 to 8 seconds after injection and up to 10-15 minutes after inhaling or smoking heroin.