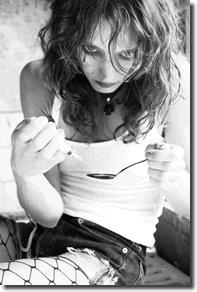 The effects of heroin take place in both short term and long term abuse of the drug. The short term effects of heroin take place rapidly after the user ingests the drug. Quickly after the user injects or snorts the drug, it crosses the blood-brain barrier. Once in the user’s brain, heroin is converted into morphine and binds itself to the opioids receptors located there. Those who have taken the drug state that shortly after ingesting heroin they experience a surge of pleasurable sensations known as a “rush.” How intense this rush is depends on how much heroin is taken and how quickly it enters their brain.

Heroin is one of the most addictive drugs because of how quickly it enters the user’s brain and begins to produce its effects. Other short-term effects of heroin use include a warm flushing of the skin, dry mouth, and a heavy feeling in the extremities which may be accompanied by nausea, vomiting, and severe itching.

Once the initial pleasurable effects of heroin have dissipated, users will become drowsy for several hours following heroin use. Their mental function is clouded and their cardiac function slows as well. Breathing is also severely slowed, sometimes to the point of death which is known as a heroin overdose.

One of the most serious health effects of heroin use is the possibility of death due to accidental overdose. Because heroin is an illegal drug and can be handled and cut (mixed with other ingredients) by various suppliers before it reaches street-level users, those who use the drug never know how potent or pure the heroin they are using is until they use it. Heroin is often mixed with sugar, starch, quinine, and sometimes, strychnine or other poisons, adding other potential dangers. Because of the unknown strength and actual contents of the heroin they are taking, users are at a great risk of overdose and death.

Another of the dangerous effects of heroin is the highly addictive nature of the drug. All heroin users, even those who only snort or smoke the drug can become addicted with repeated use. Over time, heroin users develop a tolerance for the drug requiring them to use increasingly larger amounts to achieve the same feeling they experienced when they first began to use.

After awhile, the tolerance level to the drug rises to the level that heroin use in any amount stops producing the euphoric effect the user once experienced altogether. When this occurs, the addict continues to seek and take the drug just to feel "normal." They become physically dependent upon the drug.

As with abusers of any addictive drug, heroin abusers gradually spend more and more time and energy obtaining and using the drug. Once they are addicted, the heroin abusers' primary purpose in life becomes seeking and using drugs. Their heroin use literally change the way their brain functions. Physical dependence develops with higher doses of the drug. With physical dependence, the body adapts to the presence of the drug and withdrawal symptoms occur if use is reduced abruptly. Withdrawal may occur within a few hours after the last time the drug is taken.

Repeated and chronic heroin users who fail to use sterile technique or share equipment will begin to experience the long-term effects of heroin: