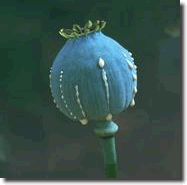 The history of heroin begins with the poppy plant. Although poppy plants have existed as far back as 3400 B.C., the use of these plants did not begin to spread across the world until the 19th century. C.R. Alder Wright, a chemist, created heroin in 1874 by creating a concentrated form of morphine. Twenty-three years later, heroin became more well-known when a chemist working for the Bayer Company, Hoffman, attempted to synthesize the compound in hopes of creating a drug that was effective in relieving pain without the addictive qualities that morphine possesses. However, they ended up creating a drug that was twice as potent as the standard morphine and just as addictive.

Although heroin was addictive, the history of heroin shows that it was originally marketed it as a non-addictive morphine substitute. It was also used on children as a cough suppressant. They discontinued this practice once they found out that heroin turns back into morphine when it enters the body. In the 1914 Narcotics Act, the government restricted the selling of heroin to only medical purposes. With this act, recreational use was still easily taking place. However, there were several more laws that eventually led to heroin becoming illegal altogether in the United States.

The history of heroin production revels that most heroin originates from opium poppy farms in South East Asia (the "Golden Triangle": Myanmar, Laos, and Thailand), South West Asia (primarily Afghanistan, Pakistan, and Iran), Lebanon, Guatemala, and Mexico. The opium gum is converted to morphine in labs near the fields and then to heroin in labs within or near the producing country. After importation, drug dealers cut, or dilute, the heroin (1 part heroin to 9 to 99 parts dilutor) with sugars, starch, or powdered milk before selling it to addicts; quinine is also added to imitate the bitter taste of heroin so the addict cannot tell how much heroin is actually present. It is sold in single-dose bags of 0.1 gram (0.03 oz.), each costing between $5 and $46 (1992). One pound of diluted heroin yields approximately 4,500 doses.

Crime has long been associated with the history of heroin. This is because its importation and distribution are illegal and because many addicted people turn to theft and prostitution to obtain money to buy the drug. In addition, violent competition between drug dealers has resulted in many murders and the deaths of innocent bystanders. From 1979 through 1990 arrests for heroin manufacture, sale, or possession in the United States held steady, but in the 1990s arrests rose as the drug's popularity began to increase once more. The heroin trade can be enormously lucrative to those in the upper echelons. For decades the Mafia has been involved in heroin trafficking operations, including the "French Connection" of the 1950s and 1960s and the more recent "Pizza Connection," which used pizza parlors as fronts. Other trafficking groups are more loosely based on ethnic or national ties; for example, groups of Chinese, Thai, Nigerian, or Mexican nationals have operated in different parts of the country. In contrast to those in the higher tiers, many dealers on the street level are addicted or imprisoned frequently, and their financial gains are limited. U.S. laws and law enforcement efforts focus on interrupting the flow of heroin into the country as well as the arrest of distributors and persons who commit crimes to support their habits.

This history of heroin use throughout the United States has many peaks and valleys. Throughout United States history, there have been periods where heroin use has been “in vogue” among certain sectors of society.  In fact, our not-too-distant past includes several times when the use of this dangerous drug was actually encouraged by medical professionals.

For example, during the Civil War, opiates (that would today bear a strong resemblance to heroin) would be used to treat injured soldiers in the field.   In the years that followed, there were even a number of cough medicines that listed heroin and opium as their active ingredients (and were available for sale over the counter). In 1906, The Pure Food and Drugs Act put an end to any deception about these dangerous products, as all were now forced to list their ingredients on the package (a practice that thankfully continues on to this day).

The history of heroin notes the heroin addiction problem in the United States began to reach its apex in the 1970’s and 80’s, when countless men and women where snorting, shooting or sniffing the drug.   The rise in heroin abuse occurred as a result of more permissive attitudes towards drug as a whole, as well as the fact that heroin had become cheaper to produce and easier to obtain.