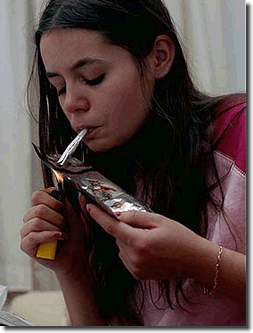 Smoking heroin is also known as "chasing the dragon". Chasing the dragon (a slang phrase of Cantonese origin from Hong Kong) refers to inhaling the smoke from heated morphine, heroin or opium that has been placed on a piece of foil. The 'chasing' occurs as the user gingerly keeps the liquid moving in order to keep it from coalescing into a single, unmanageable mass.

Heroin smoking was popular in Shanghai during the 1920s and involved the use of porcelain bowls and bamboo tubes. This method of heroin consumption eventually made its way across much of Eastern Asia and to the United States over the next decade. 'Chasing the dragon' was a later refinement of this form of smoking heroin, originating in or near Hong Kong in the 1950s, and refers to the ingestion of heroin by inhaling the vapors which result when the drug is heated-typically on tin-foil above a flame. Subsequent spread of 'chasing the dragon' to other parts of South East Asia during the 1960s and 1970s, to some parts of Europe during the late 1970s and early 1980s, and to much of the Indian sub-continent during the 1980s.

Smoking heroin as an ingestion method has been accomplished with various vaporizing apparatus, including traditional opium pipes. A makeshift method for smoking heroin involves putting the substance in an empty teapot, heating it over a stove, and inhaling through the nozzle via the nose or mouth. Heating on a small piece of aluminum foil and inhaling through a tube (usually a cut-up pen or section of aluminum foil rolled into a tube) is another common method. (See image above.)

In American drug use slang, "chasing the dragon" refers to the elusive pursuit of the ultimate high in the usage of some particular drug. The term alludes to the feeling that the next ingested dosage of the drug will result in a nirvana that seems and feels imminent and conclusive, yet upon consumption never quite yields the promised experience—leading to the desire for the next dose that still promises the same—thus chasing the dragon but never catching it (like "chasing after the wind [a wild wind] " a biblical term). Most common recreational drugs germane to the term include inhaled cocaine, heroin, nitrous oxide, inhaled amphetamines, and sometimes shorter-acting psychedelic compounds such as mushrooms, DMT, MDMA, and even marijuana when used in ritual form.

Evidence suggests that smoking heroin has many hazards. Smoking heroin may lead to toxic leukoencephalopathy. Such ingestion may pose less immediate danger to the user than injecting heroin, due to eliminating the risk of transmission of HIV, hepatitis, and other diseases through needle sharing, as well as the stress that injection puts on veins. The technique also avoids the delivery of heroin into the bloodstream instantaneously, as is the case with injection, a fact which may reduce one's chances of accidentally overdosing. A small puff can be inhaled as a method of gauging the strength of the heroin. Also, the lungs can act to filter out additional pollutants that otherwise would pass directly into the bloodstream; however, it is never harmless to expose the lungs to any kind of smoke.

The New York State Office of Alcoholism and Substance Abuse Services has prepared a memorandum to alert health agencies and drug treatment programs to the link between smoking heroin and an incurable neurological condition that can rob users of muscle coordination and speech, and if untreated can lead to paralysis and death.

Dr. Arnold R. Kriegstein, a neurologist at the Columbia-Presbyterian Medical Center, sounded the alarm after treating a Greenwich Village musician and his girlfriend whose coordination, gait and speech deteriorated after they smoked heroin. According to Dr. Kriegstein, who has since diagnosed a third case in a friend of the couple, the degeneration can be arrested but has no cure.

The medical condition, called leukoencephalopathy, affects the part of the brain that controls motor skills. The disease takes at least two weeks to manifest itself, with a progressive loss of muscle coordination, a condition called ataxia. Afflicted heroin users become clumsy, their speech slurs and they wobble when they walk.

''They may not be able to coordinate muscles to perform everyday functions, let alone functions that demand a degree of skill or training such as playing a musical instrument,'' the memorandum reported. Without treatment, it said, they can lose the ability to talk, become paralyzed and die.