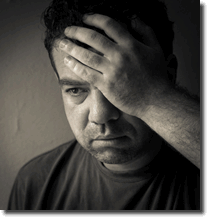 Heroin withdrawal occurs when regular heroin use is discontinued or reduced. Heroin withdrawal may begin within 6 to 24 hours of discontinuation of the drug; however, this time frame can fluctuate with the degree of tolerance as well as the amount of the last consumed dose. Heroin withdrawal will usually peak between 48 and 72 hours after the last dose. Within a week, physical withdrawal symptoms should have subsided, although the individual may experience some residual weakness and pain. Although the physical withdrawal symptoms may be over at this point, the brain still needs to re-learn the process of making the endorphins which the user has been substituting with heroin. This can take an additional two weeks to two months until the body stabilizes its endorphin production. It is only after restoring this brain chemistry that former addict really feels good, however, he or she will still have a psychological dependency to heroin.

Common heroin withdrawal symptoms include: nausea, vomiting, diarrhea, chills, a runny nose, goose bumps, sweating, tears, insomnia, aches and pains in the muscles and joints, extreme restlessness, yawning, abdominal cramps, dilated pupils, and overall flu-like symptoms. Many individuals also experience psychological symptoms including anxiety and depression, with severe cravings for the drug. Heroin withdrawal can also cause muscle spasms in the legs which causes the person to kick (“kicking the habit”). Heroin withdrawal symptoms can be extremely uncomfortable but are not life threatening except in very rare circumstances.

Attempts to stop using heroin can fail simply because the withdrawal can be overwhelming, causing the addict to use more heroin in an attempt to overcome these symptoms. This overpowering addiction can cause the addict to do anything to get heroin. On the other hand, psychological cravings can also overcome the former user throwing him or her into relapse.

Withdrawing from heroin can be painfully intense so it is highly recommended that the person seek care in a heroin detox facility where medical professionals can manage and minimize the symptoms associated with heroin withdrawal under 24 hour care and supervision.