Heroin use and abuse is associated with serious health conditions, including fatal overdose, spontaneous abortion, collapsed veins, and infectious diseases, including HIV/AIDS and hepatitis. 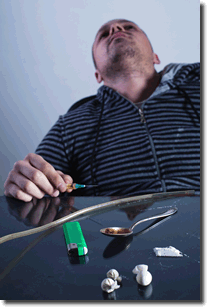 Some users describe the initial effects of heroin as a rush that lasts only one or two minutes that is said to be caused by the injected heroin bathing the brain before it gets distributed by the bloodstream and changed into a more useable form of morphine. This "rush" effect is often glorified as a heightened sexual orgasm, and a great relief of tension, which pervades the abdomen. After the rush, the high lasts for four or five hours and is caused by the morphine diffusing from the bloodstream into the brain. It is described as a warm, drowsy, cozy state. Addicts report a profound sense of satisfaction, as though all needs were fulfilled. There is also a pleasant state of mild dizziness that is not as impairing as alcohol's effects, and a sense of 'distancing' or apathy toward whatever is going on in the environment. Eventually addicts lose this effect of euphoria, and use heroin only to relieve unpleasant withdrawal symptoms. It is estimated that about 23 percent of individuals who use heroin become dependent on it.

The health risks of heroin can be extremely serious and sometimes deadly. Such risks include fatal overdose, spontaneous abortion, and the risk of contracting HIV/AIDS and hepatitis to the users who inject heroin intravenously. Heavy heroin addiction can effect the heart lining and valves and can cause abscesses, collapsed veins, and liver or kidney disease. Respiratory complications, such as different types of pneumonia may also develop caused by heroin’s depressing effects on respiration. Additionally, street heroin often contains toxic additives and contaminants that can clog blood vessels leading to the lungs, liver, kidneys, or brain, causing permanent damage to vital organs.

Continued or long term heroin use causes the person to develop a tolerance to the drug. This means that as the body becomes used to the effects of heroin where higher doses are needed in order to produce the same effect. The addicts dose increases more and more which in turn greatly increases the health risks caused by heroin. Continued heroin use causes physical dependence where the body adapts to the presence of the drug and withdrawal symptoms occur if use is reduced abruptly. Heroin withdrawal may occur within a few hours after the last time the drug is taken. Symptoms of withdrawal include restlessness, muscle and bone pain, insomnia, diarrhea, vomiting, cold flashes with goose bumps ("cold turkey"), and involuntary leg movements ("kicking" the habit). Major withdrawal symptoms peak between 24 and 48 hours after the last dose of heroin and subside after about a week. However, some people have shown persistent withdrawal signs for many months. Heroin withdrawal is very rarely fatal to otherwise healthy adults, but it can cause death to the fetus of a pregnant addict.

One of the the most destructive effects of heroin addiction, other than overdose and death, would be the addiction to heroin itself. As the degree of the heroin addiction increases, behaviors such as lying, cheating, stealing, missing work, financial problems, and legal issues all become very serious effects that destroy the addicts life as well as for everyone associated to the heroin addict.