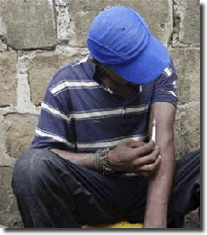 Shooting heroin often feels like a ritual for the user. Once the heroin is purchased, the preparation starts almost immediately. First, everything will be put out on display and placed in order. A heroin users “kit” includes, heroin, a syringe with needle, spoon, lighter or candle, cigarette filter, belt, citric acid, and water. The heroin is put onto the spoon with citric acid, the right amount of water will then be mixed with the heroin and citric acid (the citric acid is used to breakdown the heroin so it can be injected). At the same time the spoon is held over the heat source so all the three substances are mixed together. Once mixed, a cigarette filter will be placed onto the spoon, the solution will then be drawn up the syringe through the cigarette filters to filter out any impurities. It is now ready to be injected into a vein usually in the user’s arm. The belt or similar implement such as a shoe lace is tied tightly around the arm to stop the blood flow; this will cause the veins to stand out for easier injection. After long periods of use the veins will become damaged and other areas of the body are used for injecting heroin. Other places used are the groin area, behind the knees or in serious cases in the neck. It has been known for addict’s veins to collapse.

HIV infection spreads easily when people share equipment to use drugs. Sharing equipment also spreads hepatitis B, hepatitis C, and other serious diseases. Infected blood can be drawn up into a syringe and then get injected along with the drug by the next user of the syringe. This is the easiest way to transmit drugs and HIV during drug use because infected blood goes directly into the bloodstream.

For a lot of people, drugs and sex go together. Shooting heroin and HIV infection happen because users might trade sex for drugs or for money to buy drugs. Some people connect having unsafe sex with their drug use. Interestingly, research shows that sexual behavior is the main HIV risk factor for injection drug users.

Shooting heroin and HIV can also be dangerous for people who are taking antiretroviral medications (ARVs). Drug users are less likely to take their medications as directed. In addition, street drugs may have dangerous interactions with ARVs. Drug and alcohol treatment to stop drug use can lower your risk of HIV infection.

When it comes to shooting heroin and HIV, drug rehab is more complex than normal drug rehabilitation treatment for a number of reasons, it is also more vital. No matter how the virus is contracted, one thing remains true: the realization that one has HIV does not make their issues with drug addiction obsolete. On the contrary, the fear and depression that accompany a HIV diagnosis can often send their heroin use and abuse into an uncontrollable tail spin.

When someone has HIV or AIDS, it is not just “hard” or illegal drugs that can cause them problems. For someone suffering with this virus even alcohol consumption can be deadly due to their lowered immune system. Consuming alcohol may lead to any number of infections that cause complications for those who are HIV positive including hepatitis C, pneumonia, and tuberculosis. In addition, AIDS-related brain damage and dementia can be made worse by substances like alcohol, heroin, crystal meth, and other common street drugs.

The drug rehab needs for someone who has problems with shooting heroin and HIV are more complicated than the treatment required for someone who suffers from drug addiction alone. A HIV or AIDS patient may be suffering from additional health complications that require frequent medical interventions during a period of rehab. They may also require life saving medications that may complicate the recovery process. Mentally, the prevalence of co-occurring psychiatric disorders is significantly higher for HIV and AIDS patients. Hence, the existence of HIV or AIDS, substance abuse, and a corresponding mental illness makes the effective rehabilitation of this group problematic.

In short, addiction recovery from shooting heroin and HIV is very complex. Heroin abuse can greatly damage an already weakened body, can reduce HIV medications compliance, and may exacerbate psychiatric conditions. Therefore, HIV and AIDS patients with heroin abuse issues desperately need intervention and intensive and appropriate drug rehabilitation. While treatment can be difficult, it is critical for anyone addicted to drugs.